The actual schedule for the Mysore classes and the Pranayama class can be found here (please note that you can start your practice within a window of time).

Once per month, I also offer led classes in Ashtanga Yoga (prior experience required, firm starting time) and on Sunday mornings meditation and chanting classes (suitable also for beginners). A few times per year, I offer introductory weekends on Pranayama (open for everybody) and refresher courses for Pranayama (prior knowledge required).

You can find an overview of upcoming workshops here, including events for family constellation work and for chakra constellations.

Pranayama class
Tu, 5.30 - 6 p.m.
only upon preregistration, not suitable for beginners

October 30th - November 2nd
Ashtanga Yoga Intensive with Greg Nardi
Preregistration as of now (morning or evening Mysore?), schedule and firm registration at the latest by May

Ashtanga Vinyasa Yoga is a dynamic form of Hatha Yoga. Positions of the body (in Sanskrit: asana) are precisely coordinated with breathing in a predefined sequence.

In yoga, one assumes that the life force (in Sanskrit: prana) is distributed throughout the body via small energy channels (in Sanskrit: nadi). Restrictions to this free flow of prana result in physical, emotional and also mental disturbances.

Through a special breathing technique (free breathing with sound), the interplay of the movements with the engaging of certain muscular and energetic centers (in Sanskrit: bandha) creates inner heat. This heat supports the purification and opening of the physical body and small energy channels. As a result, more vitality is available. Healing can occur on all levels.

In addition, each asana has a specific focal point (in Sanskrit: drishti). After several years of practice, the use of the drishti in combination with the special breathing technique helps you achieve a meditative state – the yoga practice becomes a moving meditation.

As the sequence of the postures in Ashtanga Vinyasa Yoga is fixed, students can do the practice also at home, independent of a teacher. The role of the teacher is to introduce the correct technique for each individual posture. The teacher can also help achieve a deeper level within the postures, by using physical adjustments.

Ashtanga Vinyasa Yoga is characterized by

- the defined sequence of the asana
- the dynamic flow between asanas
- the special breathing technique
- the combination of movement, breathing and focal point (in Sanskrit: Trishtana)
- the use of bandhas
- the parallel development of flexibility and strength
- the possibility of active support by the teacher in form of physical adjustments
- the autonomy of the practice, independent of a teacher.

In the beginning, Ashtanga Vinyasa Yoga should ideally be practiced two to three times per week. Over time, practice should, if possible, become a daily routine, with one rest day per week (traditionally on Saturday) and an additional rest day on full and new moon days.

While Ashtanga Vinyasa Yoga is physically demanding, it is suitable for people of all ages and physical abilities.

"Ashtanga Yoga is for everybody, just not for lazy people. " (Sri K. Patthabi Jois)

On the meaning of ”Ashtanga Vinyasa Yoga”:

Ashtanga describes a system, consisting of eight elements (in Sanskrit, the word Ashtanga is a combination of "ashtao", meaning "eight", and "anga", meaning "limb"):

These elements are closely linked to each other. The practitioner of Ashtanga Vinyasa Yoga can develop all the above mentioned elements, over time.

Vinyasa refers to the interplay between the movement and your breathing.

Yoga comes from the Sanskrit word for “yoke” and in a wider sense "union" or "integration". Originally, yoga was a spiritual path, with enlightenment as the ultimate goal. With this intention, yoga has been practiced for over 2,500 years. The (sometimes exclusive) emphasis on the physical aspects of yoga (asana) is a development of the 20th century.

Please note: due to the Corona virus, all classes are cancelled until further notice.

You can find the schedule here. And directions here.

Deviations from the usual schedule
The next led classes will take place on Thursday, April 2nd, at 6.15 p.m. and on Friday, April 3rd, at 9 a.m.. Please preregister until the morning of the day before (in case of less than 2 registrations, there will be a class in Mysore style instead). Participants should know the standing sequence. The following led classes will take place on May 14th in the evening and May 15th in the morning.

Pranayama
The Pranayama classes take place each Tuesday from 5.30 to 6 p.m. (only upon prior registration, not suitable for beginners).

The next Pranayama refresher is scheduled for March 29th from 10.45 until 12.15 a.m. (only upon prior registration, not suitable for beginners).

The next weekend workshop for Pranayama will take place from March 27th to 29th.

The next evening of constellation work will take place on May 15th in Eppstein, Am Königsberg 53, in the space of Andrea Hielscher, in my own practice on June 19th, each time from 6.30 p.m. until about 10 p.m.. 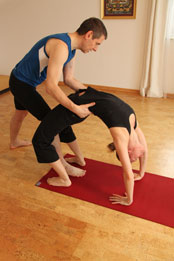